skip to main | skip to sidebar

Kraftin' Kimmie Stamps has been celebrating December with the 12 Days of Krafty Christmas. From December 1st-11th we have looked back at the 2016 monthly releases. Each month was spotlighted on its corresponding day. For December 12th, we thought it would be fun for each Krafty Krew member to create a new project featuring their favourite set from the year.

This was a tough decision! 2016 saw the addition of so many fabulous new KKS clear stamp sets! I decided to showcase Teacup Fairy by Annie Rodrigue who was released back in March. I adore Annie's characters and I also adore tea...perfect combination for me! I decided to put a Christmas spin on this fairy. The image was coloured with Copics. I chose some pretty glitter papers for paper-piecing the cup and saucer. Shading was added to these papers with Copics. I feel this is such an important step in paper-piecing...without that shading, the pieced elements would appear completely flat. If you've spent the time creating depth and dimension while colouring the rest of the image, make sure to add that finishing touch to your paper-piecing! I also go around all exposed paper edges with a coordinating marker. This hides the white paper core...it also helps any paper-piecing to blend in seamlessly with the rest of the image. The rest of the vintage (another favourite of mine) paper is from Michael's. I opted out of including the fairy's antennae...if I wanted to include them, I simply would have stamped my image on the patterned paper and matched up the image when adhering. 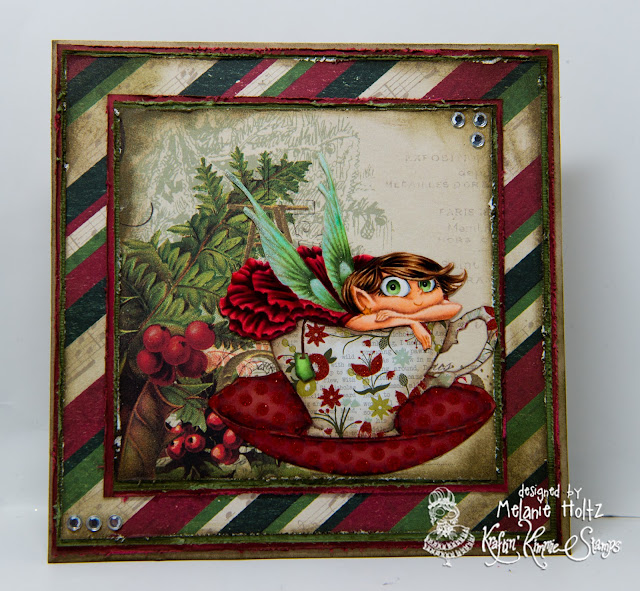 Make sure to stop by the KKS blog today to see which stamps the rest of the Krafty Krew chose as their favourites of 2016!

Thanks for stopping by.

Posted by Melanie at 7:00 AM No comments:

Hi everyone! Welcome to another challenge at Kraftin' Kimmie Stamps...this week our theme is PAPER PIECING!

We invite you to play along by submitting your project at the KKS Blog. One winner per month will be drawn from all Saturday Challenge entries to win a $20 gift card, and you can enter as many times per month as you'd like!! November 11th at 11:55 pm EST is the deadline.

This sweet little elf is one of two main images from the Treat Yours-Elf stamp set. The sentiment is also part of the set. I stamped the image in Memento Desert Sand and coloured with Copics. I paper-pieced the gift to look like wrapping paper. I always add shading to my paper-pieced elements to ensure they blend into the coloured image. Without that bit of shading to create dimension, the gift would appear as flat as the coordinating background paper. 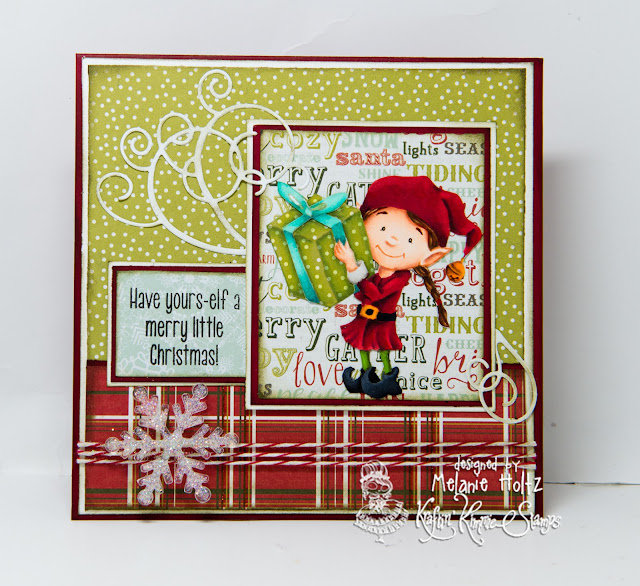 Hope you plan to play along! Make sure to stop by the KKS blog to see more paper-piecing projects!

Thanks for stopping by,

Melanie
Posted by Melanie at 7:00 AM No comments:

Hi there! I have loved art since I was a little girl and you could often find me with a pencil and sketchbook in hand. As an adult, I enjoy experimenting with various mediums including paint, coloured pencils and markers. This blog is primarily focused on stamping and papercrafting. I am so grateful for this community and the friendships I have formed with other crafters from around the globe. Thanks for visiting!